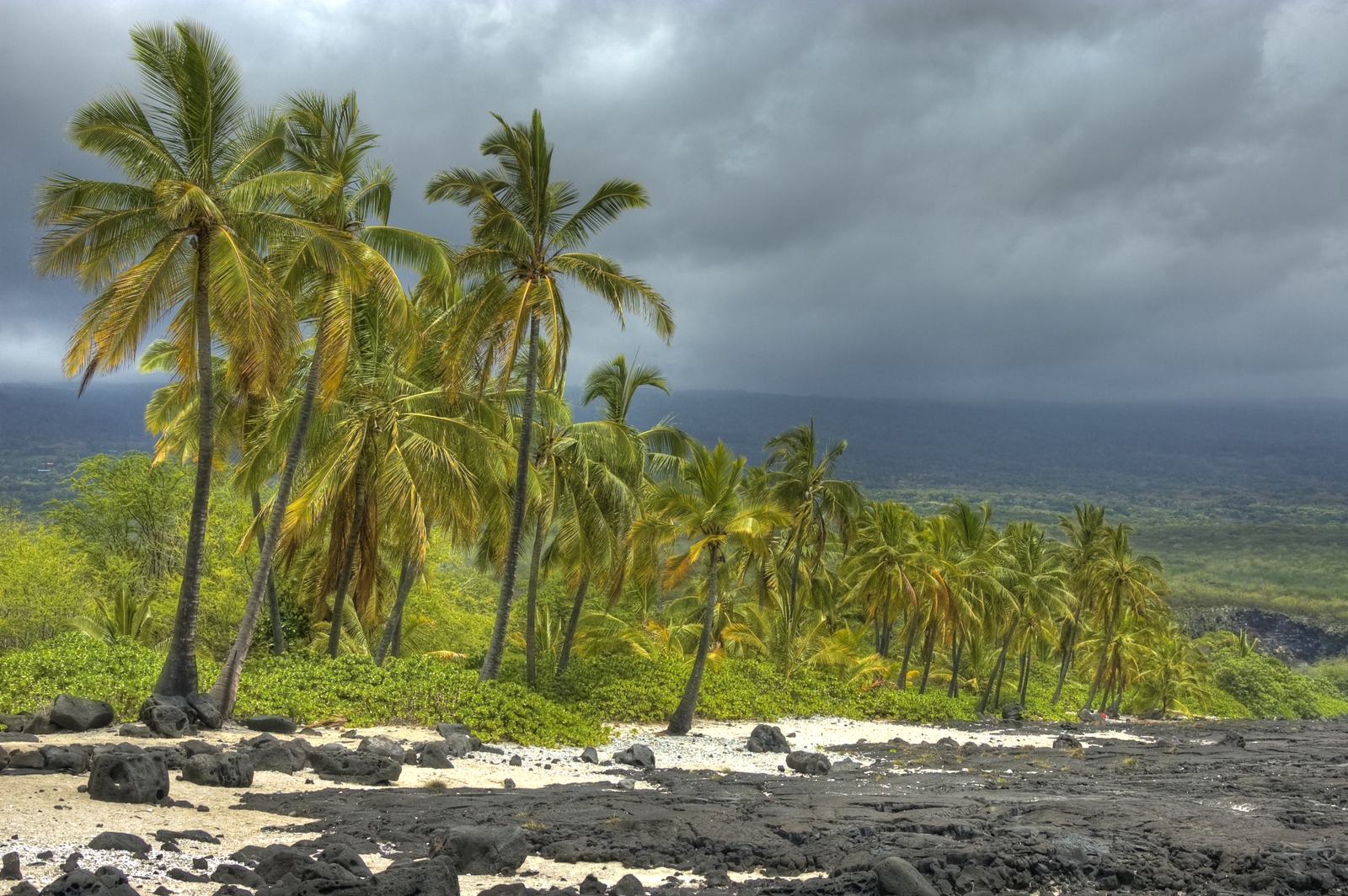 The Orchid Isle
The Island of Hawaii is often called the “Big Island,” and what an appropriate name it is. Nearly twice as big as all of the other Hawaiian Islands combined, its sheer size can be inspiring. You’ll find all but two of the world's climatic zones within this island’s shores.

Geography
Hawaii’s Big Island is the youngest and largest of the Hawaiian Islands; it is currently 4,028 square miles andis still growing as lava continues to pour out of Kïlauea, the world’s most active volcano. It has 266 miles (428 km) of coastline. Hawai‘i’s Big Island stretches from sea level to the volcanic peaks of Mauna Kea, 13,796 feet (4,205 m), and Mauna Loa, 13,677 feet (4,169 m). Hawaii’s Big Island has the Islands’ highest lake, Lake Waiau, at 13,020 feet (3,969 m) above sea level; the state’s longest sheer drop waterfall, ‘ Akaka Falls, 442 feet (135 m); the southernmost tip of the United States, Ka Lae (South Point) and the tallest mountain measured from the ocean floor, Mauna Kea.

Ecology
Of all the islands, Hawaii’s Big Island is the most ecologically diverse, with natural environments ranging from the desert plains of Ka‘u to the rain forests above Hilo, to snowcapped Mauna Kea. There are said to be13 climatic regions on earth and the Big Island has all but two - the Arctic and the Saharan.

Brief History
Believed to be the first Hawaiian Island discovered and settled by Polynesians, perhaps as early as the fifth century, Hawaii’s Big Island has been the scene of many of the state’s historic events. The birthplace of King Kamehameha I, the Big Island was the one from which he launched forays to unify the islands. For a time, it was the capital of the kingdom. Hawai‘i’s Big Island was also the scene of King Kamehameha I’s death, and with it the end of the kapu system, abolished by his successor (and son) Kamehameha II in 1819. Kealakekua Bay, Captain Cook’s first Big Island landfall in 1779, and the scene of his death, is the site where the first Christian service (a seaman’s burial) was performed on Hawai‘i’s shores. Today, much of ancient Hawai‘i can still be seen throughout the island, where historical sites have been preserved.

• Ka Lae is the southernmost point in the United States.

• Kïlauea is the world’s most active volcano and has been continually erupting since 1983.

• Nearly every one of the Big Island’s stunningly diverse regions - from the lava fields of Puna to Kohala’s lush valleys - boasts its own nationally recognized park.

• Parker Ranch is one of the largest privately held ranches in the United States. • Milolii, on the southern Kona Coast, is Hawaii’s last authentic native fishing village.

• You can see 90% of all the stars visible from earth from Mauna Kea, the world’s tallest mountain when measured from its base below sea level. 13 world-class telescopes, representing nine countries and 30 years of astronomy research are found here.

• Hawai‘i’s Big Island has 12 spas, making it the perfect destination to renew the spirit.

• The Merrie Monarch Hula Festival, held annually in Hilo, is the largest gathering of hula in the world.

• Hawai‘i’s Big Island is known as the Golf Capital of Hawai‘i with 20 golf courses and several more scheduled for completion.